Bees are very fascinating insects. They are basically vegetarian wasps, collecting pollen and nectar – ensuring reproduction for the plants they pollinate while foraging (Including most fruits and vegetables we all love to eat). There are over 20,000 species of bees out there! Some are as tiny as fruit flies while others are so big flowers bend under their weight (See picture to the right). Bees can be found all over the world from hot deserts (desert environments are probably even where the first bees occurred) to extremely cold environments such as the Arctic or high elevation environments in the Alps. In some curious bee species males don’t have wings! And although most bees live solitarily – which means a single female builds her nest and collects pollen and nectar for her offspring all by herself – there are species that live in complex societies. The best-known example is the honeybee, which has different castes, division of labor, and colonies that last for multiple years. These examples of diversity are just some of the reasons why bees are so fascinating to me.

I like to think about diversity. How does diversity evolve? How do new species evolve? And despite their large ecological importance and their fascinating diversity in behavior, distribution ranges, etc. we don’t know much about the process of speciation in bees.

And then there are orchid bees. Orchid bees are colorful bees that can be found only in the neotropical region (All the way from Mexico to northern Argentina – and there is one species in Florida that got introduced there about 20 years ago). The most curious behavior of orchid bees is that males collect scents from flowers and other environmental sources such as fungi and rotten wood to concoct a complex species-specific ‘perfume’ blend. This perfume functions as a pheromone in that it is used by the males to attract conspecific females to find a suitable mating partner.

This can potentially lead to rapid evolutionary changes of olfactory traits and preferences through mutations in chemosensory genes. I am interested in the evolution of the sense of smell and how it is involved in changes in the perfume and species divergence. Specifically, I am interested in the sensory biology, neurophysiology, chemical ecology, and olfactory memory involved in pheromone communication and the underlying molecular mechanisms through which these evolve. And orchid bees are a perfect study system to learn about pheromone evolution and speciation. Read more about my research here. 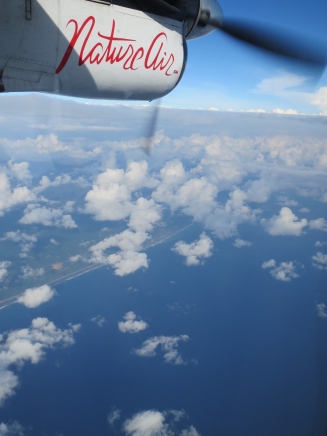 On my way to La Gamba field station, CR 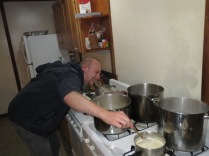 Me, after passing my quals. (Art by Gideon Bradburd) 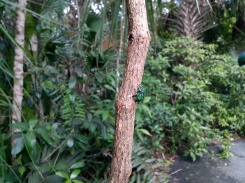